Leopard Geckos are one of the more popular and loved reptiles in the industry. Being cute as a button, tame, easy-going, and with a relatively easy care level, it is easy to see why. As with other reptiles, you may have heard the term "morph" when it pertains to leopard geckos. A "morph" is a variation in size, shape, color, and pattern that makes each leopard gecko unique. Through selective breeding, there have been several defined morphs that have been created.

When I first got into reptiles, the majority of my experience was with bearded dragons, and I used to think there were a lot of bearded dragon morphs... I had no idea of the number of leopard gecko morphs! There are so many different types of leopard gecko, especially now that we have had them in captivity for a while; they have been bred to come in all sorts of different colors and patterns.  There are always new morphs emerging and being created through breeding of different types of gecko, so it is challenging to keep up with all of them.

First, some terms will need to be known to be able to get a general understanding of the terminology that is sometimes used when describing a morph. Reptiles' genetics can get pretty complicated, and these terms are given a necessary explanation to make things more simple.

Below are some of the various morphs that you may encounter when it comes to Leopard Geckos. (There are many different variations and offshoots, so this list does not contain every single morph that exists)

Normal morphs are the standard gecko you will most commonly find, they are usually the ones you will fond at chain pet stores and are the most inexpensive of them all. Nothing wrong with owning one as a pet though, they are just as friendly and entertaining as any leopard gecko and suffer the least health issues due to certain morphs being bred incorrectly to gain specific characteristics. 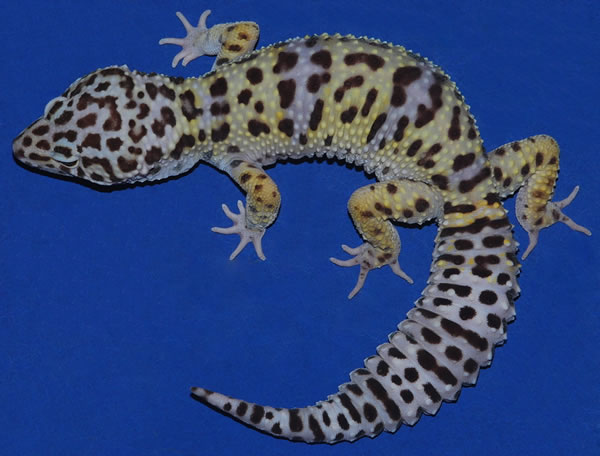 Your normal morph is the basic yellow gecko with black spots that all the other variations have stemmed from. These are the ones you will find in the wild and the least expensive and most readily available. The high yellow is the most closely related to the normal morph type, and they resemble the normal but with a brighter yellow color, and with fewer spots. Still inexpensive and easy to find.

Pale with black bands, these leopard geckos are usually white at birth but develop the darker bands over time. The result of breeding two mack snow geckos, these reptiles have solid eyes with heavy speckling all over. 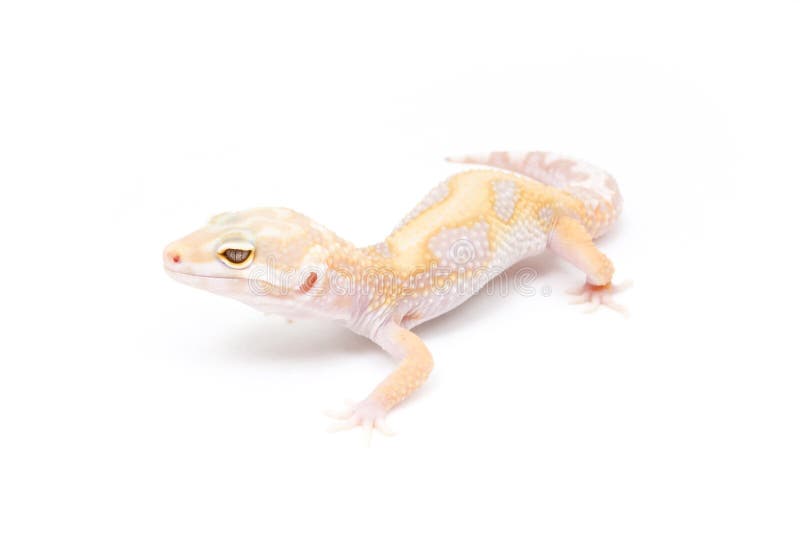 Tremper Albinos were amongst the first albino morphs to be discovered. They have silver eyes with red veins and come in a variety of different colors such as brown, orange, yellow, and pink. They lack the dark spots and stripes of other morphs. Also known as the Florida Albino, usually lavender-ish with brown spots. A distinguishing characteristic is their pink eyes.

The striped morph displays a dark stripe that runs down the length of their bodies. 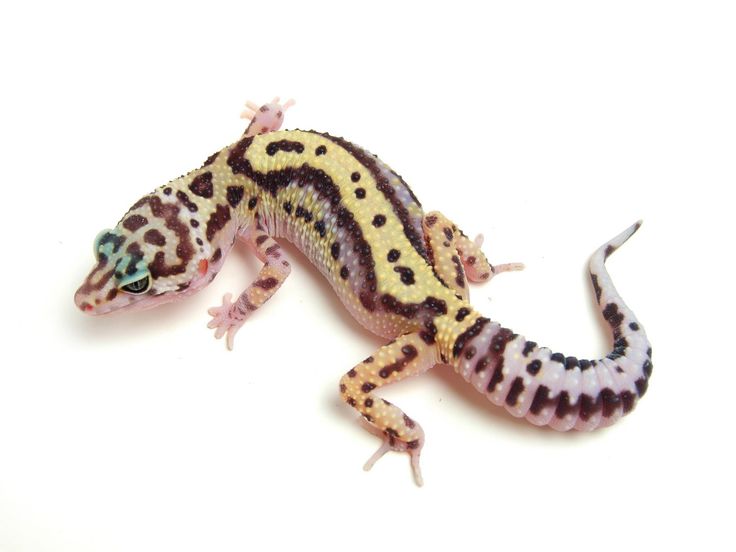 Bold Stripes show patterns and unique striping that run down the sides of their bodies rather than the middle of their backs. The physical appearance of this morph makes it highly desirable, and these can be very expensive. Red Stripe Leopard Geckos have two reddish stripes that run down each side of their back. The stripes are not usually evident until around six months of age, and they are typically born with some brown coloration where the stripes will eventually appear. 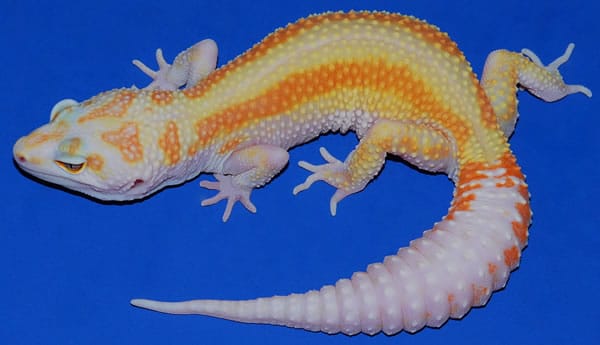 Just as the name suggests, this morph of the leopard gecko is bigger than usual. Some geckos are naturally just a bit bigger and are mistakenly labeled as giants when they are not true giants.

This particular super giant is the homozygous version of the giant and is even bigger than the regular giant morph.

These are the biggest out of all the giant varieties, quite rare they are super expensive, easily being sold for over $1,000!

Hypomelanatic (Hypo) has less melanin, which means they have much less spots on their bodies; they never have more than ten spots in total. They still have spots on their heads and their tail, however. Hypermelanistic means that they have more melanin than usual, giving them a darker pigmentation overall. 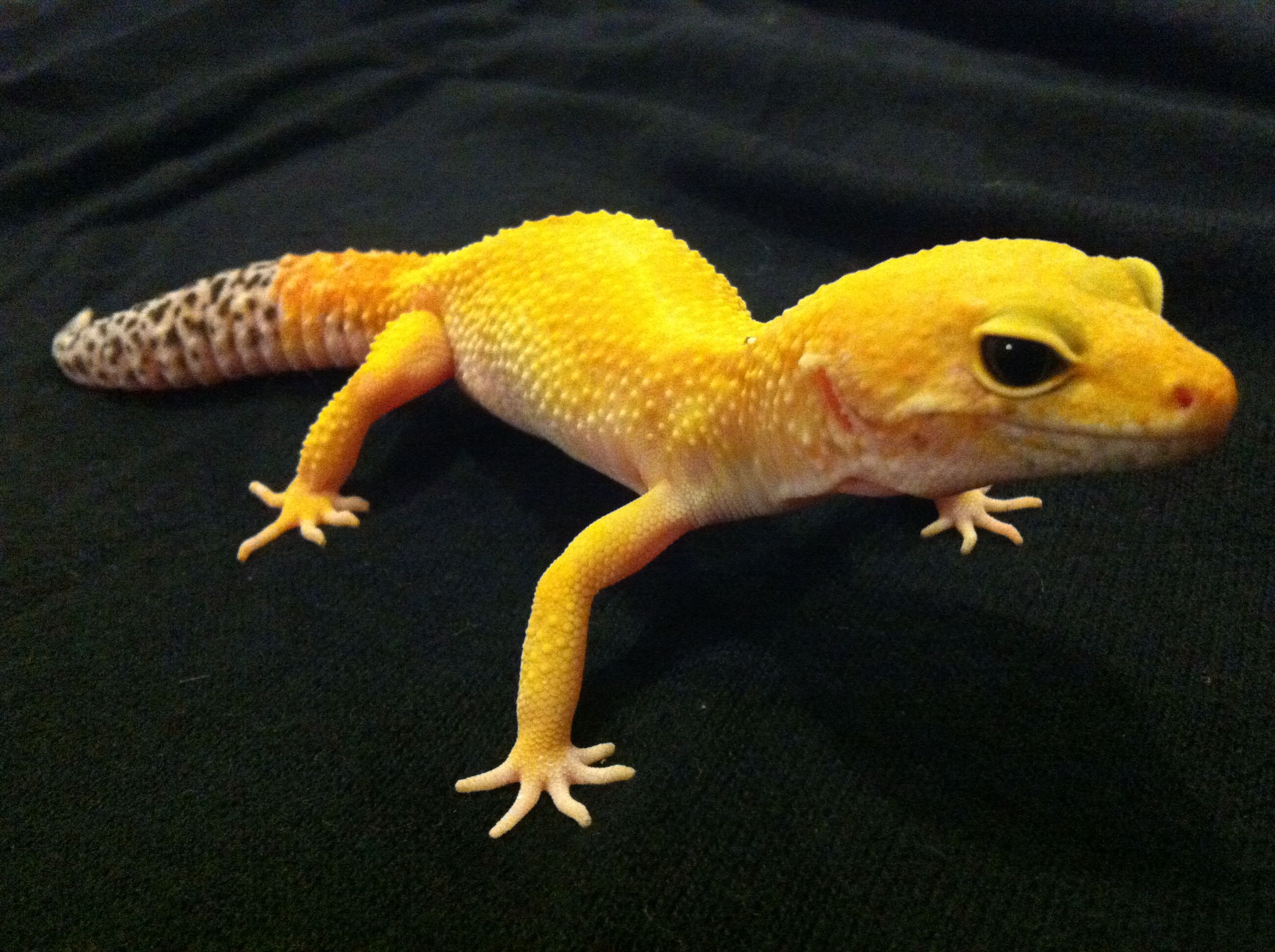 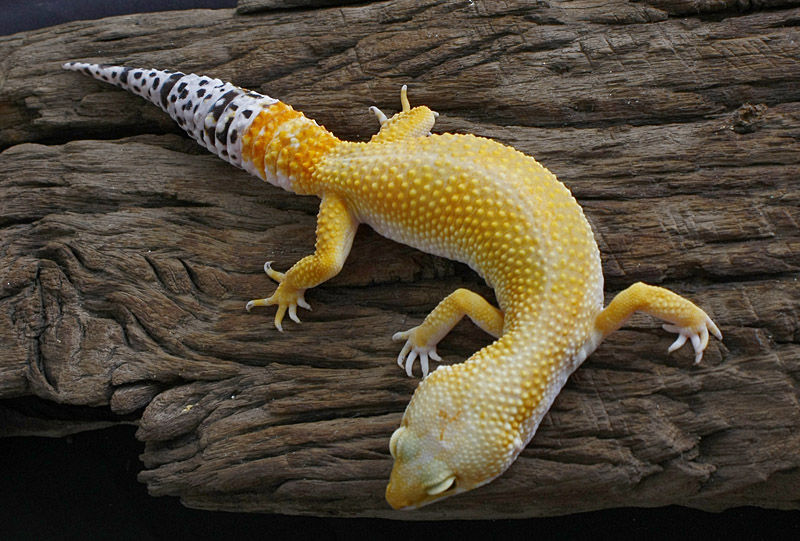 Baldies are a version of the super hypo, but they have no spots on their head. Known for their reddish tone, the redder they are, the more expensive they can get. 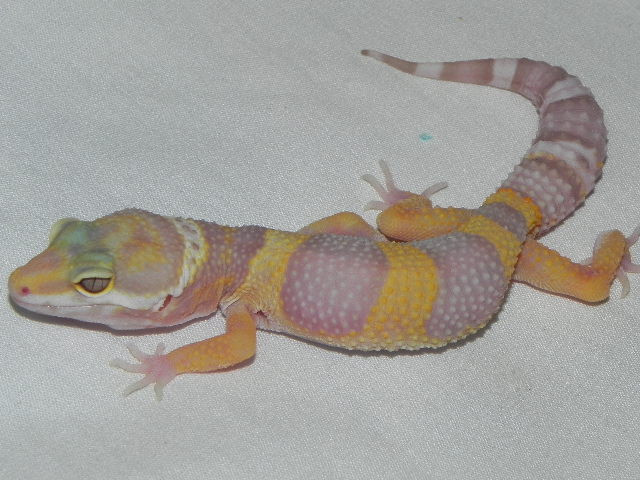 Hybinos/hyper-albinos are made by combining the super hypo morph with any other albino. Usually a solid yellow/orange-yellow with albino eyes. Also known as sunglow. Also known as Ghost morphs, they are very light in color, which fades to an even lighter color as they age. Since they resemble mack snows as babies, they are often mislabeled and only identified as they mature. Blizzard geckos are entirely devoid of any pattern; rather, they are a solid color across their entire body. They are usually white or yellow. Darker versions are sometimes known as midnight blizzards. 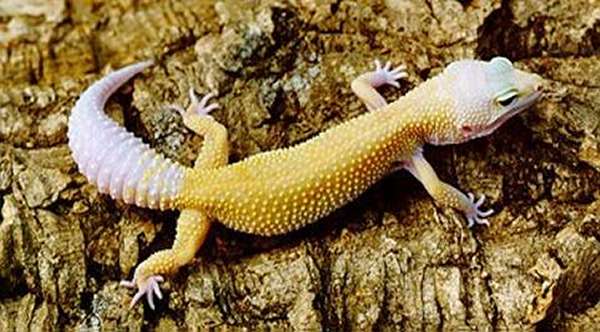 These are still under development by breeders, combining blizzard, patternless and albino traits. Their eyes will resemble the specific type of albino they have been bred from while their body will display characteristics consistent with the patternless they have also been bred from. Also known as Murphy Patternless, these leopard geckos have no identifiable spots once they have matured into adults. Very similar in appearance to the blizzard morphs. Usually, they are purple-ish or gray, although some are green or yellow.

Certain other morphs have been produced that do not fit into the above categories. 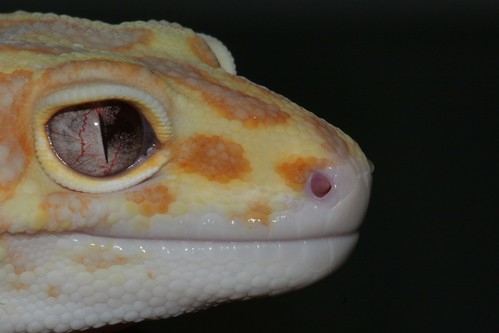 Snake eyes are sometimes seen in the Blizzard, and Tremper Eclipse morphs. These have eyes that are not solid in color, giving the impression of a snake eye. Their disrupted, broken patterns characterize aberrants. To be a true aberrant, the inconsistent pattern must be displayed only on the tail or on the body but not on both. 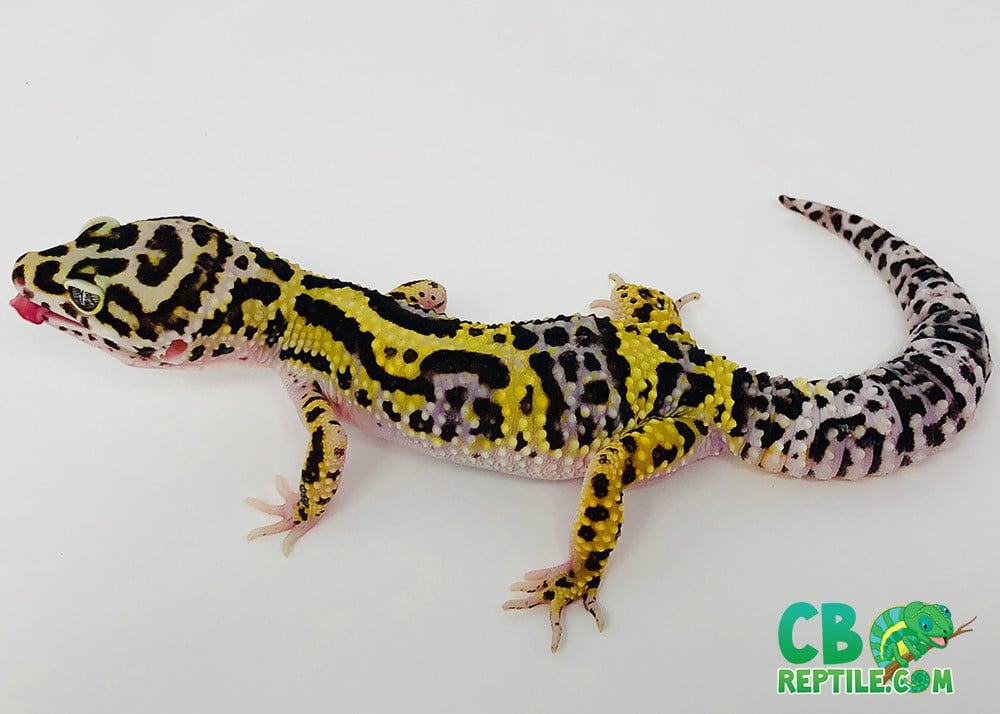 Jungle are much like an Aberrant except that the broken pattern is present on the tail and the body. 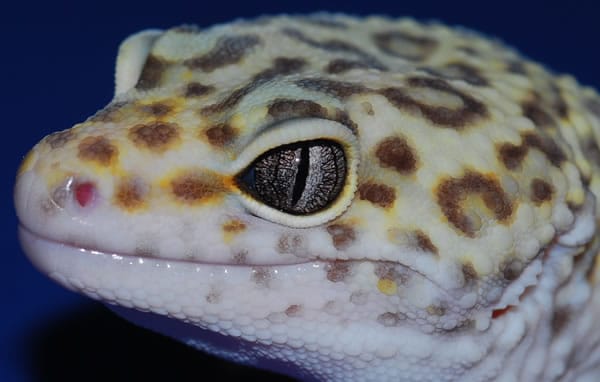 Very rare, their eyes resemble a marble giving them a sort of three-dimensional appearance. 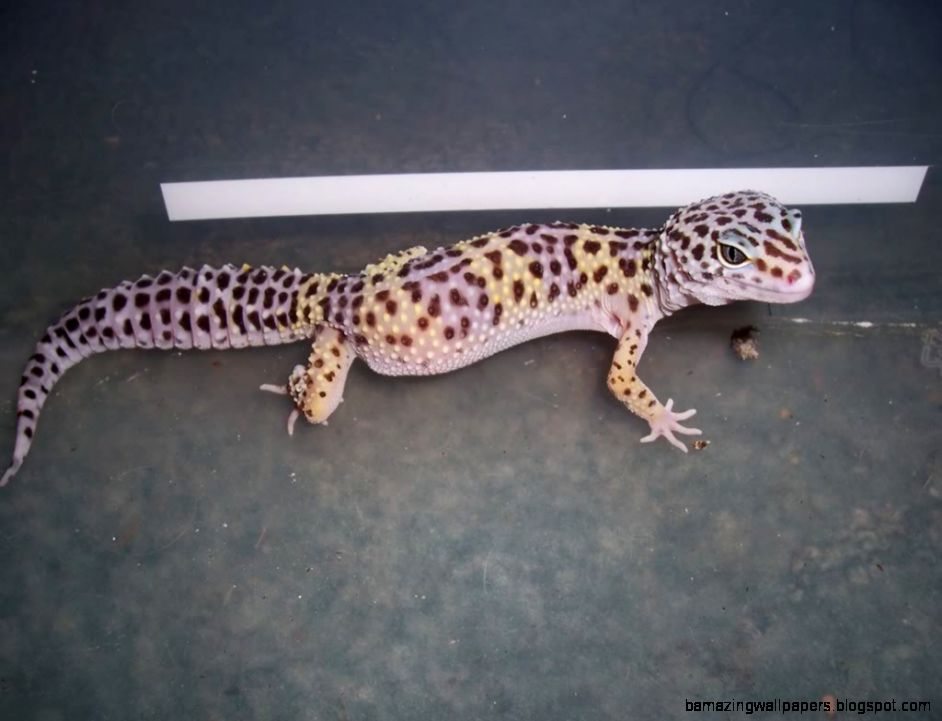 Generally, a term given to any Leopard Gecko with lavender or violet variations on its body. Known to be quite tricky to produce, as they age, sometimes the marking that gives them their name can disappear. Tangerine can be applied to any gecko that displays a shade of orange, so it can be quite a general term. 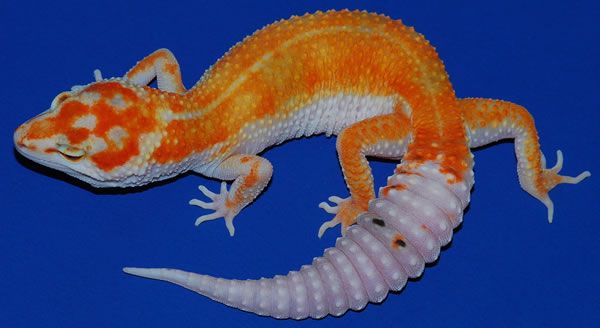 These morphs are known for their bright orange head, hence the name. The more orange the head, the more expensive these can be. Carrot Tails have orange on their tails rather than their heads, but the same applies to them. Raptor stands for Red-Eye Albino Patternless Tremper ORange. These morphs have red eyes and orange bodies. This morph is the product of combining Eclipse, Patternless Stripe, and Tremper Albino morphs. Reverse Stripe, Carrot Head, and APTOR morphs were all created during attempts to produce the RAPTOR morph.

Albino Patternless Tremper Orange, same as the RAPTOR but without the red eyes. 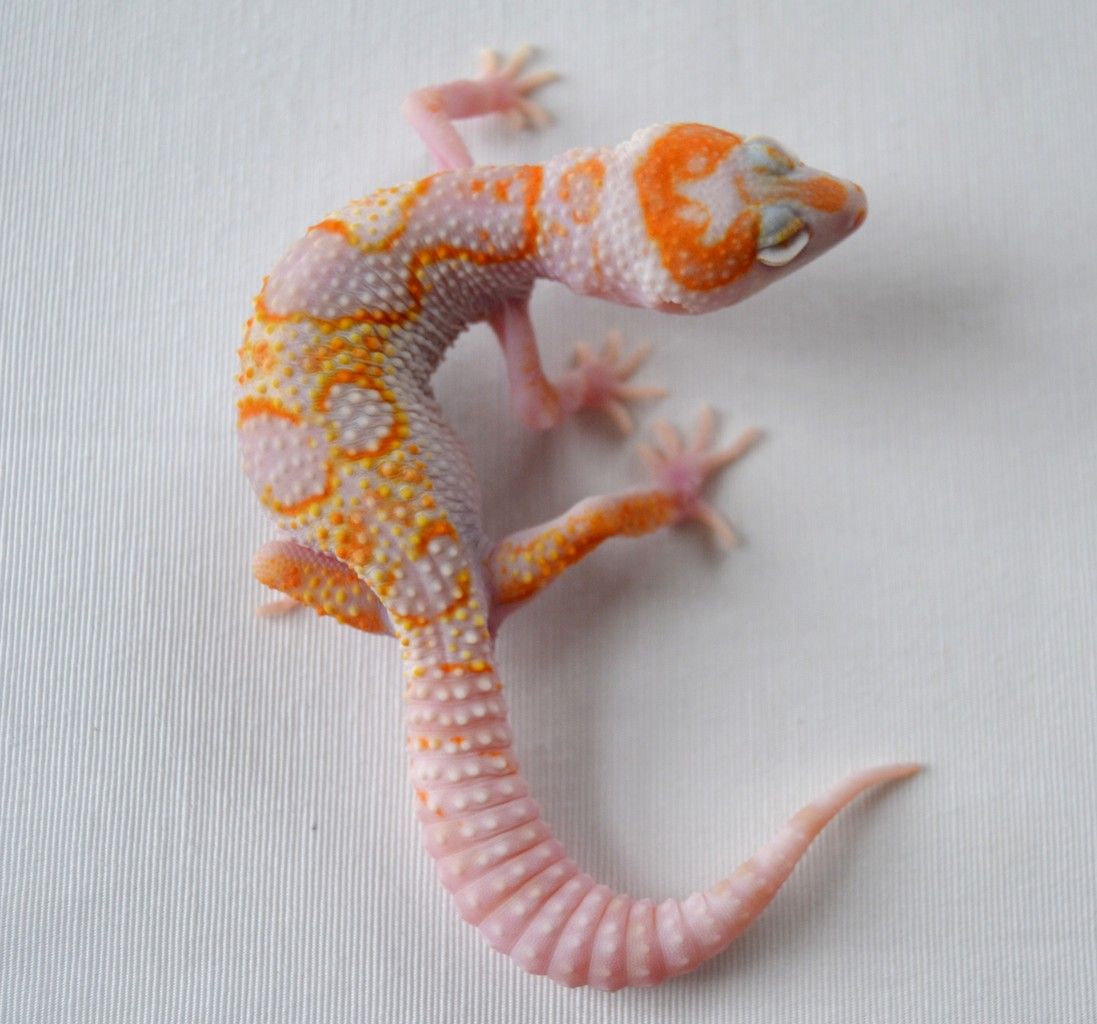 This morph stems from combining the Enigma, RAPTOR, and Mack Snow morphs. They are usually an orange and white color hence the name.

When it comes to buying a health gecko, there are several things to watch out for, take a look at out, check out our guides help with various aspects.

What To Look For In A Healthy Reptile

I just wanted to say the creamsicle is the coolest gecko variant I have ever seen. It’s beautiful and the specimen you photographed looks very happy and healthy. :)