Bearded dragon morphs refer to specific traits that a dragon possesses. These traits are usually based on the genetic lineage of the dragon, and they can alter the dragons appearance and feel. Morphs in bearded dragons are determined by recessive, dominant or codominant genes passed down from the bearded dragon's parents. A recessive gene will be visually apparent when not masked by a dominant gene, which will be evident over a recessive gene. Codominant genes become apparent when both genes are equally dominant, and you will be able to see the visual effects of both. Genes have a direct impact on the phenotype (visual characteristics) of the dragon. The paradox morph does not seem to have an identifiable gene associated with it.

Even though morph can determine the appearance and, in some cases, has an effect on the color, people confuse morph and color. Morphs are not determined by the color of the dragon, for example, "sandfire red" or "citrus" are simply color schemes that have been given names and are not referring to the morph of the dragon. Since colors are subjective, these names can change, they are also sometimes applied by sellers of bearded dragons in an attempt to promote the sales of their dragons.

Heterozygous morphs occur when two genes should have produced a specific phenotype, but because they do not entirely match, they have not produced the physical characteristics that they should have. The dragon still possesses the morph, but it cannot be visually recognized, it will still be passed down to any offspring as if it were normal. The only way to know if a dragon possesses is a "het morph" is by having knowledge and definitive proof of the dragon's lineage. The most common morph is usually known as "normal" or sometimes "wild" because it is the most common dragon and is the closest visually when compared to those traditionally found in the wild. They can range in color but are generally perceived as a sort of dull gray, ranging into yellow and brown, feel rough to the touch, and have large spikes compared to the other morphs.

The Italian leatherback is the most common form of leatherback found today, nearly all leatherbacks found in the dragon trade have this gene. The Italian leatherback gene is codominant, producing dragons with finer scales all over, and smaller spikes around the head and down each side of the dragon. This creates a smooth feel to the touch and a more ordered appearance in general. The traits of this gene are due to mutations in the gene that controls the scale formation of the reptile, which interferes with their scale development. This mutation is considered to make bearded dragons more fragile, so less likely to thrive in the wild, while they have been spotted in the wild, the instances are few and far between. The dragon must carry one copy of the leatherback gene to be considered a leatherback; if the dragon has two copies of the gene, then it will be regarded as another morph (see Silkback). The patterns and pigments appear brighter and more intricate on leatherbacks, making them stand out visually compared to the normal morph. 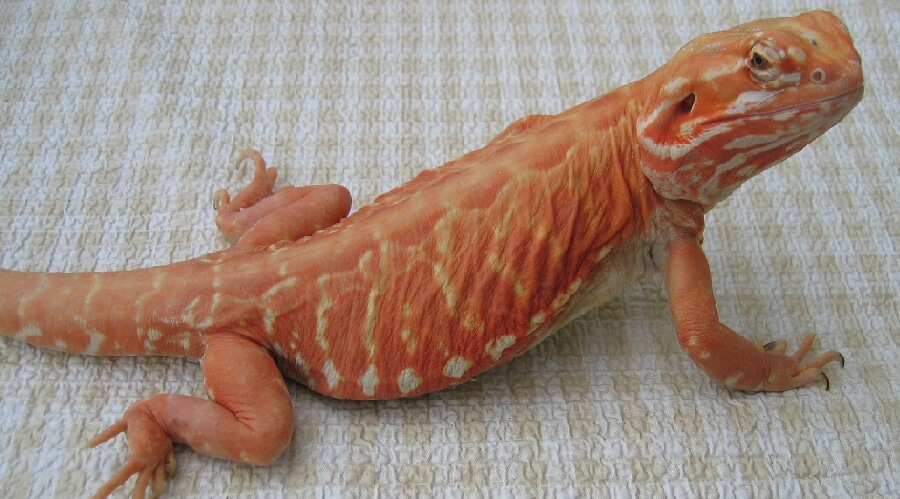 Silkback morph dragons, also known as silkie or scaleless is a variation of the leatherback. This gene occurs when two leatherbacks have been bred together, producing a dragon with two copies of the leatherback gene. This results in a beardie with no scales at all but skin, no spikes of any kind, and a unique look compared to any of the other types of dragon. Scales are usually used to protect the dragon, so being a silkback that has no scales makes this morph more sensitive to heat and ultraviolet light, as well as their skin being more delicate and susceptible to cuts, bites, and scrapes. Silkbacks also seems to always be in a constant state of shed and can have quite serious problems when it comes to having stuck shed issues. Due to these issues, general care needs to be taken when looking after a silkback, and they need less intense forms of light and heat, they also need to have specific skin maintenance using a moisturizing agent of some kind to help with their shedding. It is not recommended to breed silkbacks; for one due to their fragile nature, the act alone can result in serious injury to the dragon, but also the gene can produce some serious ongoing health issues related to their genetics. Silkbacks tend to present with very vibrant, unique colors. Despite their unusual appearance and bright colors, the practice of breeding for silkbacks is highly frowned upon, as these dragons often present with serious genetic defects and general health issues, so it is considered to be unfair to attempt to produce silkbacks. 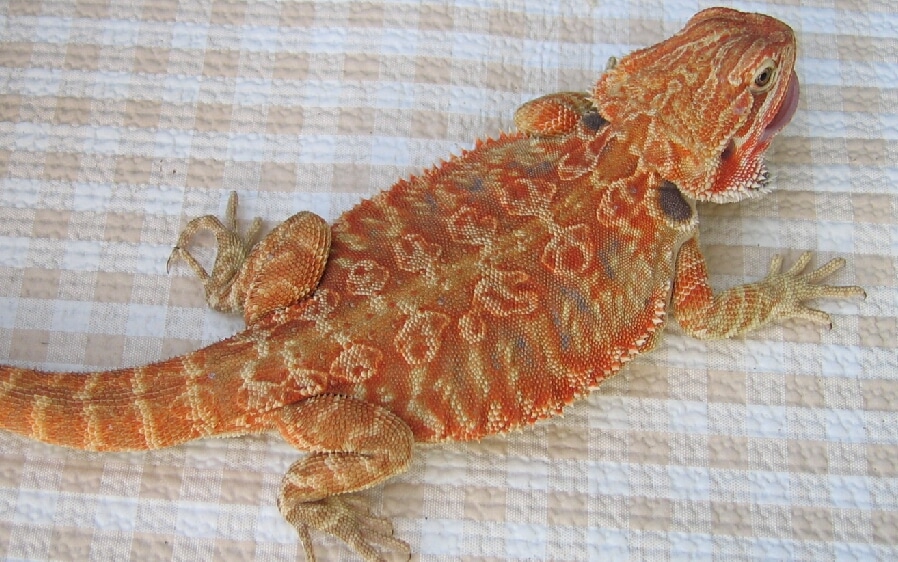 The American Smoothie gene is indistinguishable from the Italian leatherback. Still, the gene that produces the leatherback appearance in the American smoothie is recessive rather than codominant meaning that two copies of the gene are needed to create a visual leatherback. As there are already two copies of the gene, this gene will not produce silkback dragons. The American smoothie is quite tricky to produce, so the vast majority of breeders stick to producing the Italian leatherback, and they both tend to be grouped into the same category of "leatherback" anyway. 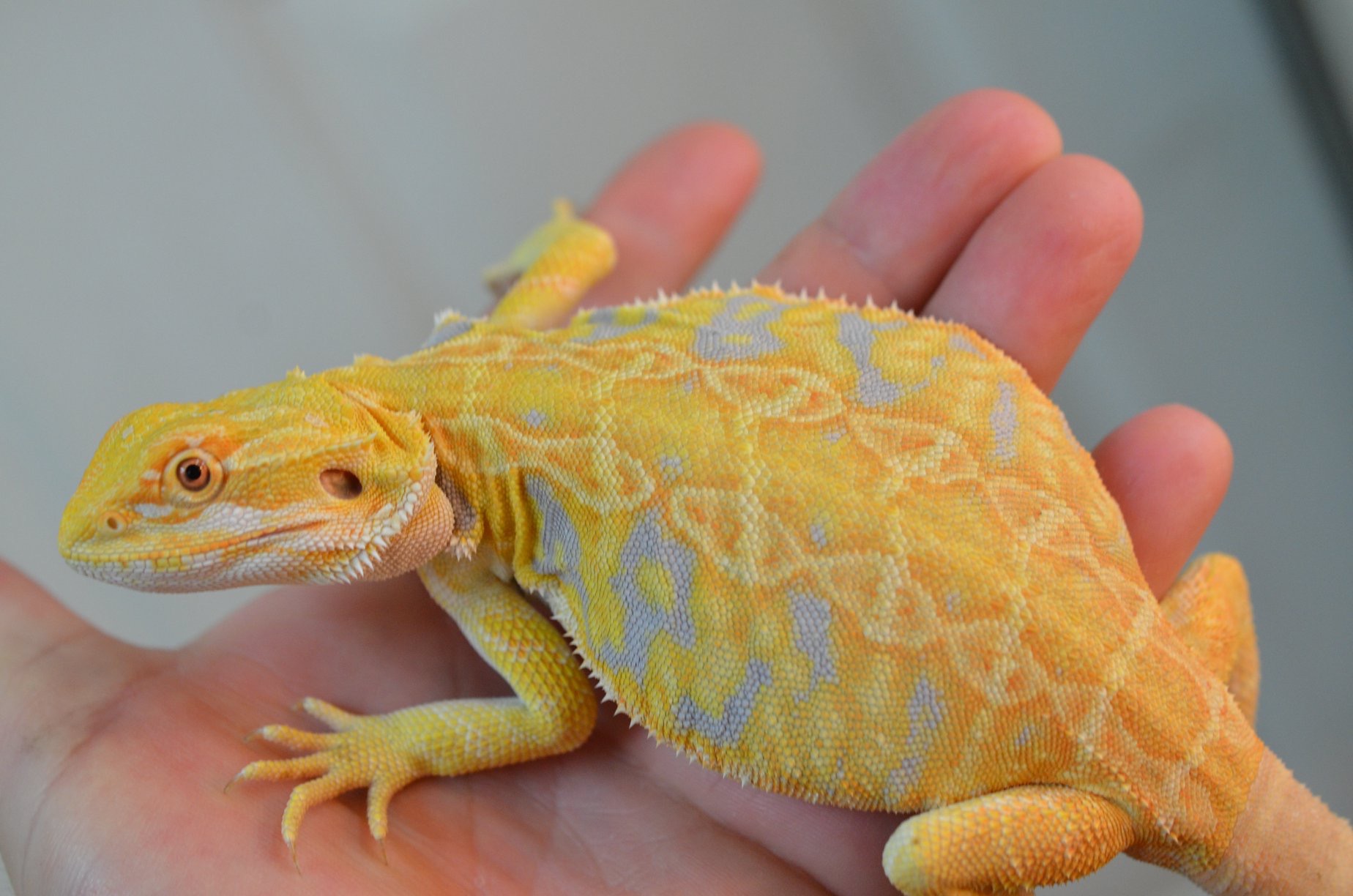 Microscale morphs are created by crossing the recessive leatherback with the codominant leatherback, creating a morph that's similar to the leather but has no spines down the sides of the body. The spikes on the head and beard are that are nearly as small as the other scales on the body. Retailers will often label a leatherback as a microscale when this is not the case to mislead people into paying a higher price. Similar in color to the leatherback morph, but their skin feels a little smoother.

The dunner morph is similar to the leatherback in that it affects the size and shape of the scales. It is a dominant gene which only requires one copy of the gene to be expressed visually on the dragon. Dunner dragons have a rough, rugged look because their scales point in different directions rather than being ordered and all pointing one way. Regular scales are more of a teardrop shape, while in dinner dragons, they are conical. The stress marks on a dunner dragon are also perfectly circular rather than the oval shapes of a typical dragon. Dunner dragons also typically have larger feet and longer toes in relation to their size than other dragons. 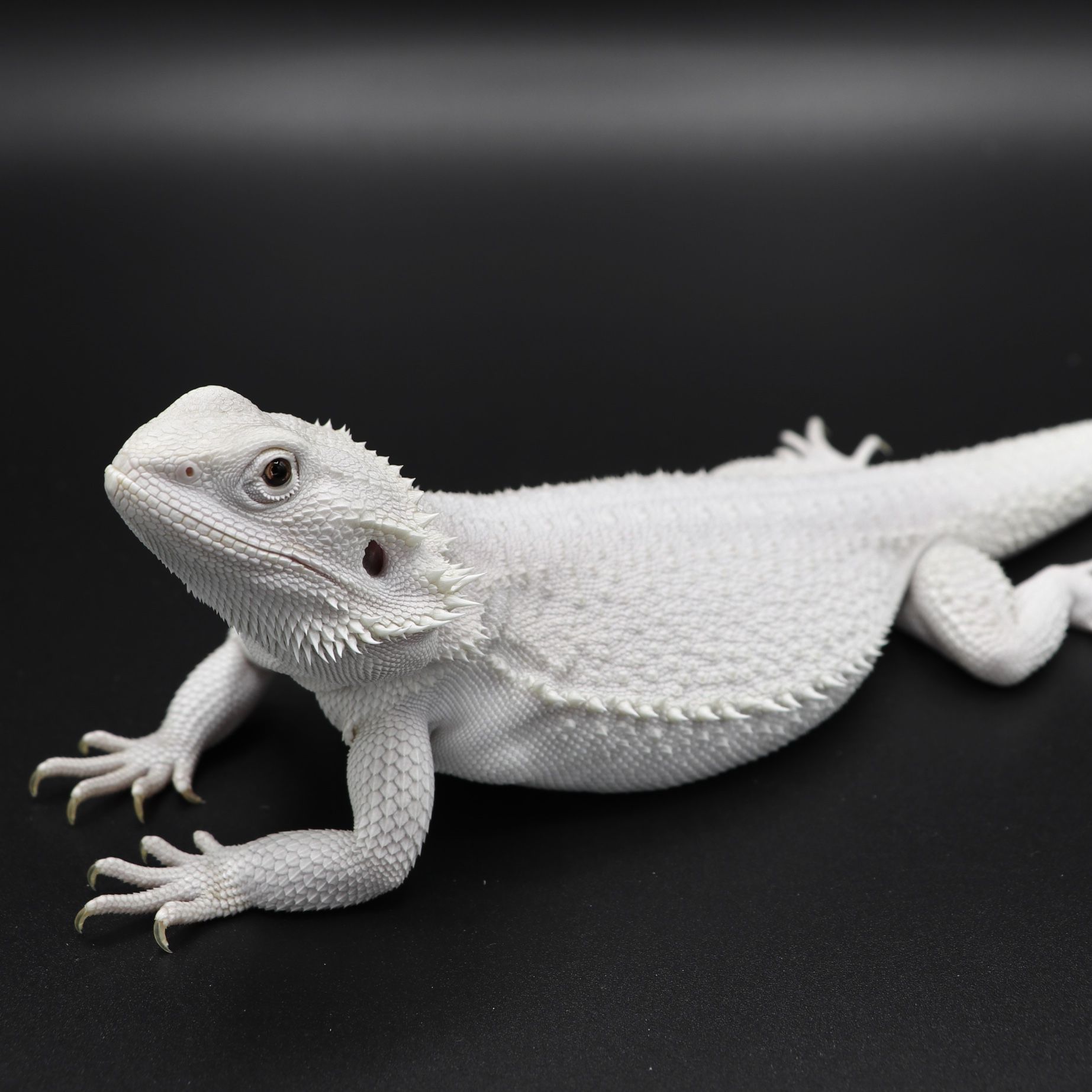 The silverback gene produces patternless dragons; it is a recessive gene just like the witblits. The difference between the two genes is that the silverback morph creates a dragon born with a pattern that fades away over time, usually to a grey/silver color in contrast to a white underbelly. The fading process usually takes about six months, after which they will resemble a witblits. There are not many of these dragons available.

The zero morph is another recessive trait that produces a patternless dragon, and they will be patternless from birth. The difference being in color, zero dragons are usually silver but can range from white to grey. When combined with the hypomelanistic morph, this can create the strikingly white individuals that are typically associated with these morphs. 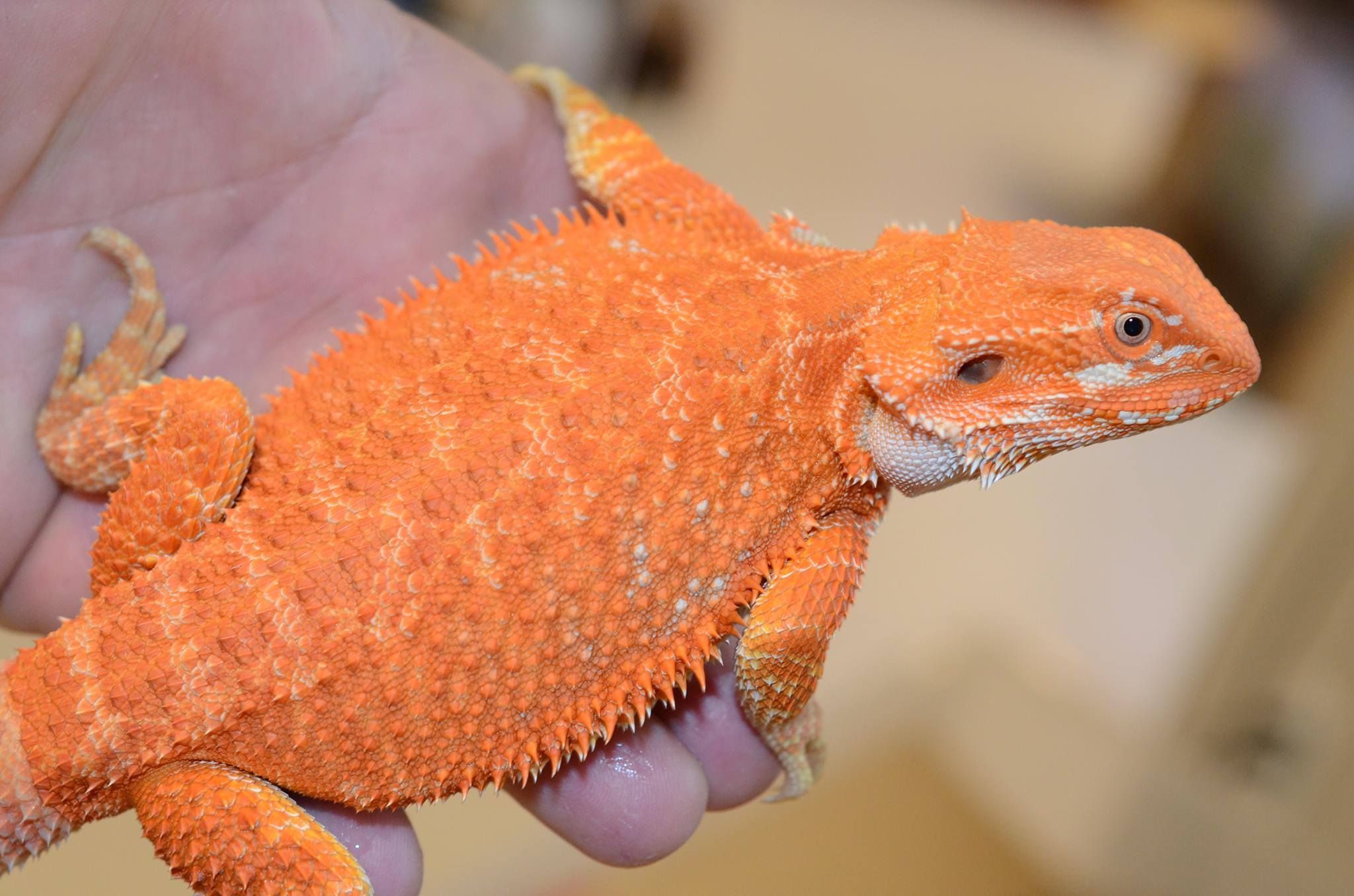 The hypomelanistic morph is a simple recessive trait that will either reduce or eliminate the dark pigmentation on a dragon, typically giving it brighter and lighter colors. One of the standard visual characteristics of this morph is the clear nails because of the lack of any pigmentation. Selective breeding with specific colors has produced some visually striking dragons, with very vibrant colors due to the lack of the darker pigments, which are highly sought after in the dragon trade.

The translucent morph is also a simple recessive gene that creates dragons with black eyes and also with scales that lack reflective qualities and white pigmentation. This gives their skin a somewhat "translucent" look, hence the name. These dragons tend to have a softer, colorful appearance, and as babies, their bellies will seem to be purple, but this fades as they age that disappear as they get older. Breeders will often pair this morph with a hypo to produce some visually stunning dragons.

The paradox morph is still a bit of a mystery as it has no associated gene. It appears in certain lines and seems to be associated when crossing the hypomelanistic and translucent morphs. Usually, a paradox dragon is born looking quite normal but over time develops dark purple bars and/or white patches that appear alongside their normal colors. Paradox dragons cannot be bred together to create more paradox dragons making them highly sought after and expensive in the pet trade. 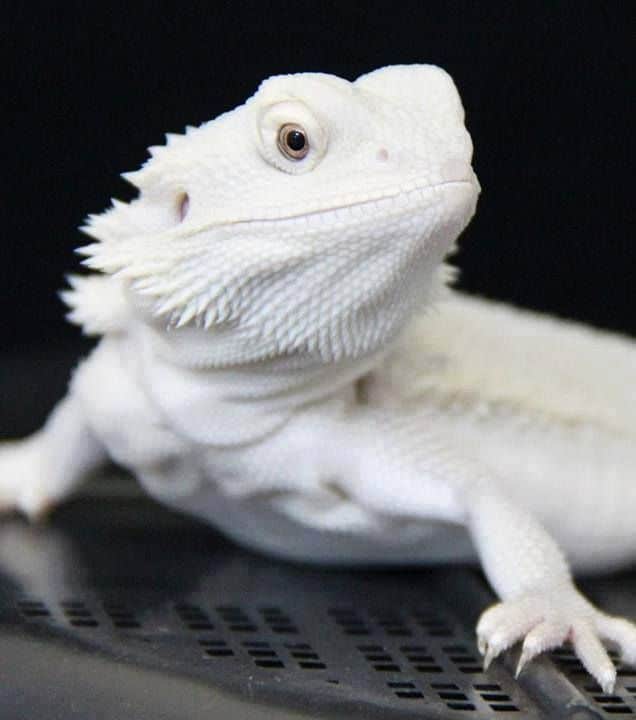 The albino morph, like other albino animals, results from a mutation that prevents the dragon from producing melanin. They are characterized by white coloration with very light patterning and pink or red eyes. Albino dragons are uncommon in the pet trade and require more care than the average dragon since the morph leaves their skin and eyes more sensitive to ultraviolet light. 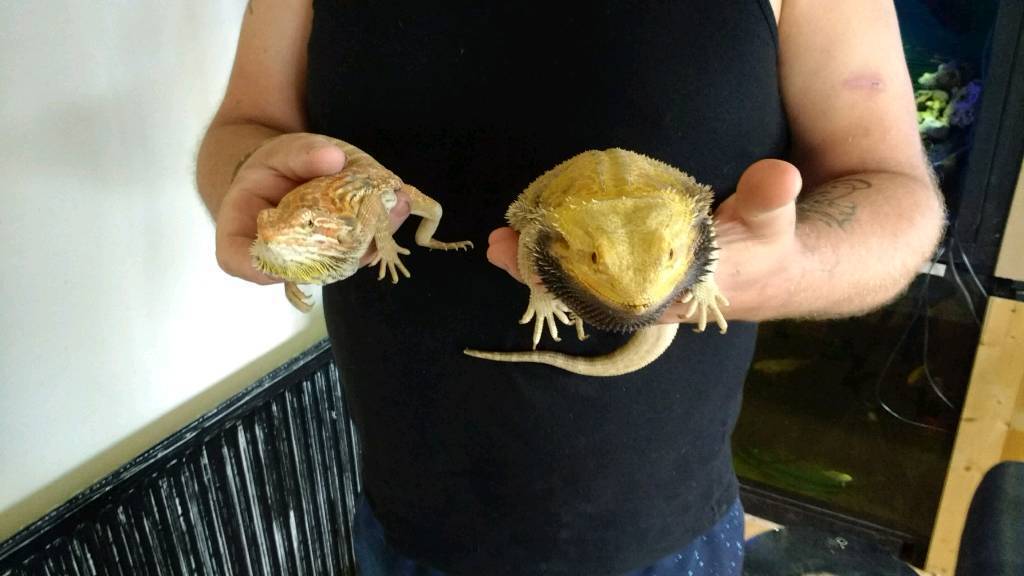 The German giant is a controversial topic, with some believing that these are simply a larger variation on the Pogona Vitticeps and some believing that they are a hybrid morph of the pogona vitticeps and the pogona barbata. Unfortunately, this is difficult to determine as the true german giants have been bred out over time, and the trait was not well documented enough at the time it was truly around. This has lead to retailers labeling a dragon that seems larger than usual as a german giant and selling it as one. True german giants were about 50% larger than regular dragons, so people believe they have a german giant, but they just have a dragon that has happened to grow a bit bigger. That being said, the German giant bloodline could very well be present in any dragon, so it's impossible to say for sure whether or not the dragon truly contains some of the german giant bloodline or it is merely a marketing ploy.